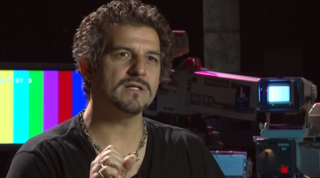 Dick Carruthers is a globally respected video director. The Brit has worked with some acts you might just have heard of: Oasis, Metallica, Beyonce, Rod Stewart and – oh yes – Led Zeppelin.

As well as music vids, Dick is the industry’s go-to guy for capturing live high-end concerts for DVDs.

He is perhaps best-known for being the film-maker behind Celebration Day; the award-winning movie which tells the story – and shows the glory – of Jimmy Page and Robert Plant’s one-off reunion gig in 2007 at London’s O2 Arena.

When you’ve toured with everyone from The Rolling Stones to One Direction, you’re sure to have seen some exceptional moments.

But as Dick explains below in his ‘high point / low point’ feature for The Independent Echo below, his career hasn’t always been plain sailing…

I’ve been very lucky to experience some great moments. The Led Zeppelin gig at the O2 was a legendary night in itself.

It took five long years later for me to be stood on stage at the Hammersmith Odeon (it’s not the Apollo, really, is it? Come on…) for the film premiere of Celebration Day – alongside Harvey Goldsmith and Robert, Jimmy and John.

What I felt in that moment might be best described as a sense of relief that it had all come together!

Another career high / one-off was in San Francisco when I worked for The Rolling Stones; we were starting a leg of Arenas after doing stadiums and it was felt the show needed a new opening video.

“It was only the second time that the rolling stones had all agreed on something on the spot.”

Mick was all excited about the idea of going to Skywalker Ranch and asking George Lucas make one.

I objected on the grounds that (a) it would be super expensive and (b) would take a long time – the first gig was 10 days away, and above all, (c) the video director (hello!) should really be, erm, directing the video.

So I put together a simple-enough idea of a build-up video showing them simply walking to the stage from the bowels of the building.

We shot everything in half a day and had the band for maybe an hour. When it was edited and finished I refused to let anybody see it until it was played on the big screen as intended – house lights out, sound blasting through the PA.

Jake Berry told me afterwards it was only the second time in history that all four Stones had agreed on something on the spot.(The first being when they first saw the Steel Wheels set and they all thought “no!”. Thankfully, this time, they all agreed they absolutely loved the video.)

Oh, and if I can have one more: in 2004, I made on a documentary about Oasis’s Definitely Maybe and conceived a clever interactive DVD with live performances, TV clips, hidden bits and B-sides.

Channel 4 broadcast the doco on a Friday night at 11:30 – I was on holiday when it aired and I started getting text after text until it got silly.

I later found out it was a rare phenomenon where the audience had gone up and up during a broadcast.

It ended up being nominated for two BAFTAs and won an NME Award – which Noel accepted and gave to me at the table.

It’s one of those flipping the bird statues… my kids think it’s really rude.

I try not to let low points do too much lasting damage – and just as well, as there’s been a few.

I often wonder about politicians who shrug off everything from scandals to personal attacks and say it doesn’t affect them. We’re all wracked by doubts and regrets, aren’t we?

2010 was a general ‘low point’ for me. Lots of things went wrong, projects fell through, but I think the candidate for the lowest individual point was being properly told off and dressed down by Rod Stewart, on-stage at rehearsals.

He stopped in the middle of a song, turned around and looked at what we were putting on the screens and said: “Where’s my fucking Ella Fitzgerald?”

I had to go up on stage and mumble excuses about decisions made due to the expensive licenses of her photos… all of which was true, but got me a class A bollocking. In front of everyone.

I wanted to cry but apparently handled it well…

That said, the first show in Florida went swimmingly. Afterwards, I think Rod declared it was the best show he had ever put on. Phew!

Post-Rod bollocking, I got on the plane back to the UK the next morning, dazed and confused and just in time for the TPi award ceremony where Jimmy Page stood on stage and told the assembled great and good of the live concert industry how fabulous I was.

That boomerang’d me right back to a career-high!

“Metallica pulled the gig. Then the stage was set on fire.”

Another real low point was when we were in Delhi in India to shoot a big concert headlined by Metallica.

As can often happen in India, we had to overcome a mountain of logistical (and translation) problems, which we sorted just before the band were about to step on stage.

Then the barriers broke.

The crowd were asked repeatedly to take two steps back. An army of people built barrier braces… tension rose in the hot sun.

Slowly it became obvious to us that Metallica production were going to pull the gig.

When the cancellation was announced, there was a riot. The stage was set on fire, stuff was looted, hundreds of people were running around backstage.

We had to take off our crew T-shirts and laminates, lest we became targets for violence, but still had to stand guard over the expensive broadcast gear since security had done a runner.

For a good while it looked like it could get very nasty.

A special mention, then, to two fine upstanding gentleman who literally faced down the mob: hats off to you Jeremy Aziz and Metallica’s agent, John Jackson.

[Picture above taken from a video of Dick talking about his craft to the University Of Westminster – check it out through here.]