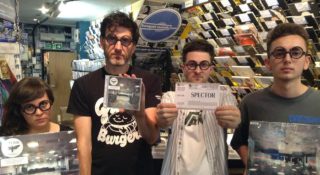 Banquet Records in Kingston, near London, has come a long way since it became autonomous in 2002, having split with the Beggars Banquet chain.

Jon Tolley and his team have forged a space that not only has a stellar reputation for a tasteful and fulsome selection, but for some legendary in-store performances.

(One of which, regular Independent Echo readers will know, was a vital factor in Hopeless Records’ All Time Low topping the UK chart earlier this year.)

We caught up with Tolley to ask him how his much-loved business is performing, as well as his hopes for the future of the music retail game…

How has business been in the past year, and how is the landscape for independent retail in the UK?

The word “business” is weird. Are you asking about P&L and Balance Sheets or asking about the shop in general?

We’re busy. Always so busy. Often it feels like we’re at capacity and then we find a way to get busier still. But in this world, as with many others, you NEED to be way busier to make the same amount of money.

We’re selling more records than we’ve ever done before and we’re more financially stable than we’ve ever been since being let go by Beggars 13 years ago. But more importantly the shop is doing good things for the music community and more wider in the local community.

“Most importantly, the shop is doing good things for the music community, and the local community.”

Because we’re so involved, it’s really hard to step back and be objective. But I’d say I feel the tide has turned.

In all types of retail, music included, and particularly those involved with “the arts”, people appreciate the role of the indies. While the majors and chains have a race to the bottom, there’s a real differentiation between them and the indies.

It’s important to concentrate on the service, not just price. People will plan the day, week, or university degree, around your shop if you do it right.

The best – and worst – thing about it is the blurred line between work and hobby.

We’re surrounded by things we love, by people we love and are a part of a music scene we love. It’s very easy to turn up to work ready to go. And within that, as we’re indie, without the bureaucracy of “head office” we can react quickly to customer needs, to bands’ needs and do what we wanna do, when we wanna do it. So that can be to customers, or to charity events, or sorting last minute in-stores.

It’s a great thing to be a part of.

Spotify, YouTube, Bandcamp are all services we use and enjoy. To pretend otherwise is daft. But we need to remember these shouldn’t be INSTEAD of physical retail.

We can work alongside these services. The way people “consume” music, and more widely arts, is constantly changing, but the race to the bottom is one we all lose.

“We can work alongside streaming services. The race to the bottom is one we all lose.”

We as retailers need to be involved in the emotional experience of physical product, and sharing those experiences with customers reinforces why it’s special and sustainable.

But people who only consume music in this way, and kinda feel that music is now free, well, they’re just not contributing to the art they profess to like. So it’s not helping anyone. But it’s the individual there that’s the problem, not the medium itself.

“The now” is the thing that makes one excited for “the future”. We’ve consistently not really tried to have a 5-year plan.

Our thing is to react to changing circumstance, trends, styles, and move to where our customer is. It’s a hell of a ride and we don’t want to get off.

We want to be as welcoming as we can to our customers and are there with them at the times they’re most excited for bands.

On the stereo this week:

Swim Deep play in the shop this week and the marrying up of live and recorded music is integral, not only our business, but music and music fans in general.

Finally able to lose their “ex-members” tags, this is a dark edgy synthy album with soaring vocals and choruses. Anthemic and awesome.

Great, weird, lyrics from a band special to us, as we released their debut in the UK