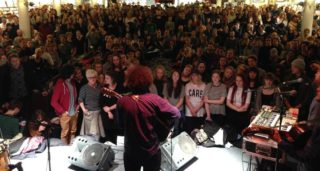 According to IFPI data, 84% of money spent on recorded music in Sweden in the first half of 2015 went on streaming.

Just 11% of the country’s recorded music market is claimed by CD, with vinyl taking less than 1%.

But don’t let that fool you into thinking the home of Spotify has completely given up on physical music.

Bengans, with a flagship store located in an old cinema in Gothenburg, is the biggest independent retailer in Sweden – and an institution for those who still like to acquire their music away from their mobile phones.

You’ll find its other outlets in Stockholm and Linköping, with an additional, smaller store in Gothenburg city centre.

How has business been in the past year, and how is the landscape for independent retail in Sweden/the Nordics?

We’re seeing a more stable market for retail this year, with some small but increasing sales.

Is there another kind? Our strength is our staff – they’re the ones who decide what we put in the front row. This gives us freedom to work with what our customer and our staff think is great music.

It’s the world order these day and it’s a great service when you want to bring your music with you.

The downside may be that you lose some personality, but that’s a personal view.

I do think a lot of record buyers use Spotify etc. to explore music, and to some extend have it as a lazy way to ”put on a record”. (I do it that way… sometimes with a record cover in my hand…)

I’m optimistic to our future as a ‘lifestyle’ provider for those people who something more than just the music on their mobile.

It would be great if the music industry didn’t put all their eggs in one basket and instead work on broader front… give the physical product a chance, there are people who are interested.

I really should check with the staff, but I know Anders is playing the upcoming Clutch a lot.

Ane Brun and Ghost is somewhat on powerplay as well.