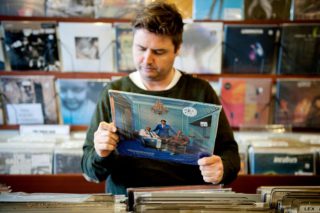 If you’re a music lover in Amsterdam, you simply have to visit Concerto.

The legendary store has been selling records to punters since it opened its doors way back in 1955 – the year Chuck Berry released Maybelline and Johnny Cash unleashed his Folsom Prison Blues.

Today, Concerto stands on the same historic site it did all those decades ago, skillfully bossed by store manager Anton Speijers (pictured).

In part of a new series on The Independent Echo, we talk to Speijers about how Concerto has survived – and thrived – by viewing its shop space as an opportunity not just to sell music, but much more besides…

How has business been in the past year, and how is the landscape for independent retail in Holland?

Last year was a very good year for all the independent record stores in Holland. The growing vinyl sales keep all the shops alive.

For Concerto it was also a good year. Sales are growing again.

We sell a lot new vinyl, but also still a lot of CDs. You see a change in the popularity of formats when you look at different titles for example; Ty Segall or Nils Frahm. We sell more vinyl of that sort of independent title.

For Alt -J the sales in vinyl and CD’s are the same. But, for example, Ry Cooder or Neil Young, the CD sales are still much more than vinyl.

“Spotify has an influence on our store, and I think we have a great future.”

If you look at the influence of Spotify on our store I would say we have a great future – ’cause you see that people are collectors. If they like Alt-J on Spotify, in the end they buy it on LP or CD.

Our customers are real music lovers and collectors. So they still buy physical product.

In the last five years we lost three big chains [in Amsterdam] – Free Record Shop, Van Leest and the Music Store – because there is a big group who stopped buying cause they have Spotify.

But mainly you can say that they already didn’t visit they indie stores anymore cause they were already downloading their music.

For all the 50 indie stores in Holland there is a future if they change their store with the times.

Concerto is a record store that features LPs and CDs, new and second-hand, plus we sell turntables and headphones, we give free concerts… You have to make your own community.

These days you can almost do anything in music retail. You’ve got a lot of freedom and opportunity.

Record companies are willing to do signing sessions, in-stores, make exclusive product etc. You can ask almost everything, they listen to your ideas.

“In the nineties, all the record companies put out music from their ivory tower. Now you go to their small office!”

In the nineties all the record companies put out just the music from their ivory tower.

Right now they ask you to come to their small office!

What do you think of music streaming generally?

For our customers, streaming music is a great tool to check music – even when it comes to YouTube. When they listen to an album a view times they come in and buy it.

People get much more information before they buy something today.

They don’t listen to music as much in our store as they used to do in the last 20 years.

For the future, I hope that the record company will be wise enough to still put out a lot of physical product for the right price. And, please, stop with the growing price on vinyl.

You see that a lot people want to buy vinyl for 20 /25 Euros. At the moment a lot of records are 30 Euros or more for no reason – it’s a mistake record companies made in the Eighties with the introduction of the CD as well.

The good news is that we are seeing a growth in younger people who buy vinyl again.