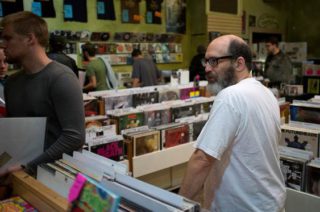 We’re not quite sure what it means when straight-faced business magazine Forbes describes your neighborhood as ‘hipster’.

Not many pinstripe suits per square mile. That’s about it.

It’s certainly true that Little Five Points in Atlanta – regularly labelled the ‘alternative’ district of the south-east US city, in the famous musical state of Georgia – certainly has its finger on the pulse of counter-culture.

A favourite of the [PIAS] gang whenever we’re in town, Criminal offers an impressive array of CD, vinyl and the usual accoutrements – plus a decent selection of comic books, not to mention a well-attended crop of in-store shows.

Below, The Independent Echo asks Levin about his business, and how Atlanta’s residents are treating physical music in 2015…

How has business been in the past year, and how is the landscape for independent retail in Atlanta, GA?

We’re cruising into our 25th year at Criminal Records with a full tank of gas. Every Record Store Day event has had double digit growth since the first.

We have huge plans underway for a celebration year, with a fresh re-design, a new store-front and we’re gobbling up the adjacent shop next door.

Our kickoff will be Record Store Day 2016 in April and we’ll have plenty of reasons to celebrate.

It’s always been a gas. I’ve worked behind the counter of a record store since I was thirteen and opened up Criminal Records when I was still a teen.

There’s a certain entrepreneurial spirit that you’ve either got or you don’t, for the life of me, I couldn’t imagine working for someone else.

I’m sure when I retire, I’ll open up a little shoppe somewhere.

Just me and a dog and some dub records, no telephone, no posted hours. That’s the dream.

What is your opinion about music streaming services such as Spotify?

Great for customers, and that’s great for record stores.  What could be easier than a well-educated consumer?

If the industry can make the money pile large enough for them to share with their artists, we might have a future economy.

Currently, only the wealthiest robber barons at the top of the music industry ladder are getting the streaming money, but it has to trickle down to the artist community, eventually.

My place in the music economy is safe and secure.  Physical retail is too small to matter and too large to ignore completely.

The vinyl resurgence, the used and on-line marketplace, the positive value proposition of the physical artifact, the ensuing CD revolution/resurgence, the community and real interactive significance of a happening scene are all true and bankable positives.

I’m delighted not to have to worry about the digital and streaming landscape.

I wouldn’t bet on any of those horses being around in a decade, I certainly wouldn’t consider them my music resources.

I do enjoy XBOX Music because it’s awesome to have my music in the background of my video games.

My car stereo gets along with my phone, that’s amazing, but CD still sounds better.

Record stores like mine have made it through the dark times – it would be choice that would put me out of business, not market dictates.

I just signed a twenty year extension on the store lease and we’re never going to run out of cool stuff to sell.

If the music industry abandons making physical goods, as they are wont to do, we’ll still have a never ending supply of antiques to cherish and trade.

The music industry needs to immediately address the wages and health of their working class, the artists and those that support them.

It isn’t economically feasible for an artist to be an artist these days and that’s abhorrent.

This burden needs to be lifted immediately and it’s the burden on the wealthiest, from Apple to Microsoft, to Spotify to whichever technological conglomeration has benefited from others’ efforts.

They should all have record labels and giant staffs, they have all the money, after all.

This is the film soundtrack to an amazing documentary, all various artists from Cambodia rescued by Dust-To-Digital.  This year’s “Searching for Sugarman.”

Pino Palladino is the best bass player in the world.

I always put on records to piss off my younger staff, only to have them end up loving them. That hasn’t happened with this record yet.